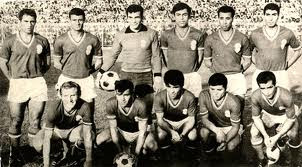 In addition to being their first Asian Cup title, it was Iran's first time in the competition. They did not enter in 1956, they did not qualify in 1960, and they withdrew from the 1964 tournament, which was hosted and won by Israel.

As hosts of the 1968 edition, Iran qualified automatically, but they quickly demonstrated their ability once the tournament began, winning their first three matches over Hong Kong (2-0), China (4-0), and Burma (3-1). Under the competition's round-robin format, the six points Iran earned from those wins were enough to clinch the title before they faced Israel, as Burma, their closest challenger, had already completed all of their matches and had only five points.

Playing before a crowd of 30,000 at the Amjadieh Stadium, Israel jumped to a 56th-minute lead with a goal from midfielder Giora Spiegel, but Iran rallied with goals from striker Homayoun Behzadi (75') and midfielder Parviz Ghelichkhani (86') to win 2-1 and complete their perfect record of four wins in four games.

Iran repeated as champions in 1972 and 1976, while Israel was expelled from the Asian Football Confederation in 1974, then joined UEFA in 1994.