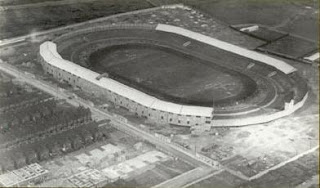 On 6 December 1930, Thames AFC set a Football League record when only 469 people showed up for their Third Division South match against visiting Luton Town.

Thames had been founded only two years earlier by a group of businessmen who had built a new ground--West Ham Stadium (pictured)--and needed a team to fill it. The stadium had a capacity of 120,000, but Thames competed for supporters with several nearby clubs who were older and thus more established, including West Ham United, Millwall, Charlton, and Orient.

Despite poor support, Thames fared well, finishing in third place in the Southern League Eastern Division in 1930 to earn election to the Third Division South. There, however, they struggled, winning only three matches and drawing two out of their first 16 to sit dead last in the table when Luton came to town.

Although only 469 people attended, they witnessed a rare sight as Thames eked out a 1-0 victory. Luton's share of the tivcket sales was a meager 1s, 7d. It was paid by postal order, which Luton framed and displayed in their boardroom.

Thames narrowly avoided relegation that year, but succumbed the following year and promptly dissolved. West Ham Stadium continued in use for racing and occasional baseball until it closed in 1972.
Posted by Brian Seal at 12:01 AM