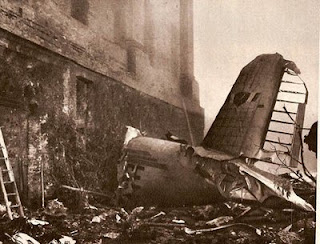 On 4 May 1949, an airplane carrying 18 members of A.C. Torino crashed into a hill outside Turin, killing all 31 passengers.

The club was founded in 1906 as part of an acrimonious split from Juventus, which led to a heated rivalry between the two sides known as the Derby della Mole.

Torino won its first Scudetto in 1928, but enjoyed their greatest success in the 1940s. From 1943 to 1948, the team called Grande Torino won four consecutive Scudettos (there were no Serie A matches in 1944 or 1945 due to World War II). The team also regularly provided the majority of the players for the Italian national team during that period. For a friendly against Hungary on 11 May 1947, all ten field players in the Azzurri starting lineup were from Torino (the goalkeeper was from Juventus).

On the day of the crash, the team were returning from Lisbon, where they had played a friendly against Benfica. The weather around Turin was poor, with rain and mist limiting visibility. As the plane approached the Turin airport, it drifted off course and crashed into a hill called Superga on the outskirts of the city. All 31 people on board died, including the 18 team members; their coach, Englishman Leslie Lievesley; his staff; the airplane's crew; and three journalists. The only Torino player not killed that day was Sauro Toma, who had missed the match against Benfica due to injury.

At the time, Torino were four points clear in Serie A with four matches left to play in the season. Torino was forced to field its youth team for the remaining matches, while its opponents fielded youth teams as well as a show of respect. Torino won all four matches to claim their fifth consecutive Scudetto, in what was certainly a small consolation for their loss. They have won only won Scudetto since, in 1976.
Posted by Brian Seal at 12:01 AM