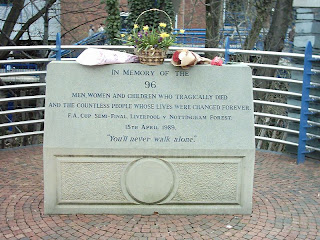 On 15 April 1989, 94 Liverpool supporters died at Hillsborough Stadium in Sheffield, England during an FA Cup semi-final match between Liverpool F.C. and Nottingham Forest F.C. Two people died later as a result of injuries sustained that day, raising the total number of fatalities to 96. A total of 766 fans were injured.

The stadium - like many around the world at the time - had standing room only areas called terraces, which were sectioned off into a number of fenced pens.

A number of fans showed up late to the match, having been held up by unscheduled roadworks. Large crowds formed at the entrances as the match started and the police, in order to ease the congestion and avoid injuries, opened two side gates into the central pens for the Liverpool supporters. The police failed to monitor the number of supporters in the central pens, however, so that the ensuing rush of supporters filled them far beyond capacity.

The people in the front were forced up against the fencing between the terraces and the pitch, crushed by the weight of the crowd behind them. Because of an absence of stewards or police to direct the crowd, the entering supporters did not know what was happening at the front and continued to press their way in to see the match. The pressure of the crowd was so great that many of the 96 casualties died while standing up.

The British government appointed Lord Justice Taylor to investigate the circumstances leading to the disaster. His conclusion, known as the Taylor Report, led to the elimination of fencing between the supporters and the pitch and the conversion of many of the larger stadiums in Britain to all-seaters.

To this day, the incident at Hillsborough is the deadliest stadium-related disaster in British history.
Posted by Brian Seal at 8:00 AM