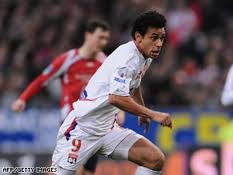 On 1 March 2008, a record crowd turned out to watch Lyon continue the march to their seventh straight Ligue 1 title with a 1-0 victory over Lille.

The result was easy to predict, as Lyon had been at the top of the table since the end of September, while Lille were twenty points back in fourteenth place despite having just completed eight straight matches unbeaten. But in order to celebrate the tenth anniversary of France's victory in the 1998 World Cup final, the match was moved from Lyon's Stade Gerland (with a capacity of 40,500) to the stadium where Les Bleus lifted the trophy, the Stade de France. The move allowed an all-time league record crowd of 77,840 to attend, dwarfing the previous league record of 57,609 set at Marseille's Stade Velodrome in 2005.

To their credit, Lille--who had held Lyon to a 1-1 draw earlier in the season--put up a fight, but eventually conceded a goal in the 32nd minute when Lyon's Brazilian striker Fred (pictured) connected with a cross and drove the ball into the back of the net. It turned out to be the only goal of the day, though Lille came close to an equalizer in the 60th minute when Pierre-Alain Frau hit the bar.

Lyon remained at the top to take their seventh straight Ligue 1 title, while Lille lost only once more to climb to seventh in the final table.