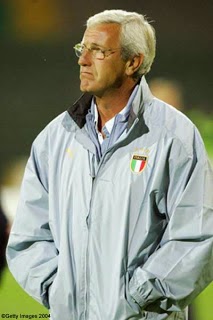 On 12 April 1948, World Cup-winning manager Marcello Lippi was born in Viareggio, Italy. After a lengthy and distinguished career as a player in Serie A, he made his real mark as a manager, winning five Scudettos and one Champions League title with Juventus before taking the Italian national team to World Cup victory in 2006.

A midfielder, Lippi spent most of his playing years with Sampdoria, for whom he played from 1969 to 1980 (with a brief loan to Serie C side Savona in his first season). In that time, he made 274 league appearances for the Blucherchiati. In 1980, he transferred to Pistoiese, who were in Serie A the time, but were relegated at the end of the 1980-81 season. He spent one year with them in Serie B before retiring in 1982.
He returned to Sampdoria later that year to coach the youth team, then spent the next decade managing eight different clubs before landing in Turin in 1994 for the first of his two spells in charge of Juventus. In his first season there, the Bianconeri won both the league and the Coppa d'Italia, while finishing as runners-up to Parma in that season's UEFA Cup Final. Lippi then put together a string of additional trophies, including the 1996 Champions League Title and back-to-back Scudettos in 1997 and 1998.
In 1999, he moved to Inter, but had an unsuccessful 1999-2000 season and was sacked after one match into the 2000-01 season. He returned to Juventus in 2001 and won two more league titles in his first two seasons back in Turin.
In 2004, the Italian Football Federation appointed Lippi as manager of the national team, replacing Giovanni Trappatoni. He helmed the Azzurri to the 2006 World Cup title in Germany and retired three days later, handing the reins over to Livorno manager Roberto Donadoni. But after a disappointing Euro 2008 performance, the Azzurri sacked Donadoni and re-appointed Lippi, who retired again after Italy failed to get out of the group stage at the 2010 World Cup.
Posted by Brian Seal at 12:01 AM