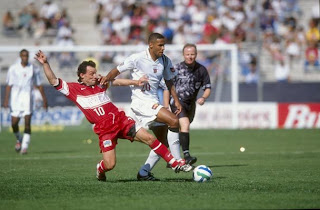 On 25 October 1998, the Chicago Fire, playing in their first season, won the MLS Cup over two-time champions DC United.

Chicago had compiled an impressive record of 20 wins and 12 losses to reach 56 points on the season, third-best in the league behind the LA Galaxy (68) and DC United (58). In the playoffs, they beat the Colorado Rapids in the conference semifinals, then advanced over the Galaxy in a conference final shootout to reach the MLS Cup.

The final was played at the Rose Bowl in Pasadena, where Chicago faced DC United, winners of the first two MLS Cups in 1996 and 1997. DC boasted one of the league's most potent attacks. Featuring forwards Roy Lassiter and Jaime Moreno, DC had scored a total of 81 goals, second only to the Galaxy's 85.

Chicago, however, managed to hold DC scoreless in the final while getting two goals of their own from striker Jerzy Podbrożny (29') and midfielder Diego Gutiérrez (45'). Both goals were assisted by midfielder Piotr Nowak (pictured), was was named the game's most valuable player.