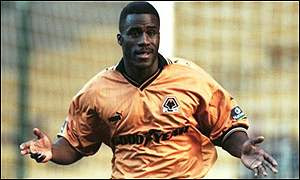 Wolves, who were making a promotion push, paid £3.5 million for the England-born Nigerian international, which was a club record at the time (and remains the highest fee ever received by Bristol City). Akinbiyi had scored 21 goals the previous season and the club hoped he would fill the shoes of striker Robbie Keane, who had left that summer for Coventry City.

Akinbiyi performed well, scoring 16 goals for Wolverhampton in the 1999-2000 season, but they just missed the Division Two playoffs, finishing in seventh place, two points behind the last playoff position. At the end of the season, he moved to Leicester City for £5.5 million, but failed to bring his scoring touch. He recorded only 11 goals in 58 League appearances for the Foxes, resulting in the Sun calling him "The League's Worst Striker."

He left Leicester in 2002 and played for a number of clubs in England and the United States. He most recently played for Notts County, but was released in May 2010.
Posted by Brian Seal at 12:01 AM