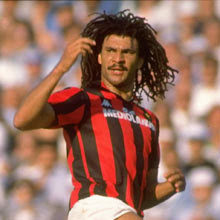 On 21 March 1987, Dutch club PSV Eindhoven sold defender/midfielder Ruud Gullit to AC Milan for the then-record fee of £6 million. Gullit had already established himself as a world class player, helping PSV to the Eredivisie title in 1986 and 1987. He was named Dutch Footballer of the Year in both years. Gullit was unhappy at PSV, however, and requested the transfer to Milan.

At Milan, Gullit cemented his status as one of the world's greatest footballers. For his work with PSV and then Milan, he won the Ballon D'Or in 1987. Along with fellow Dutch internationals Marco van Basten and Frank Rijkaard, he helped Milan claim the Serie A title in 1987-88 after a club drought of nine years. Gullit's Milan went on to win two more Scudettos in 1992 and 1993. Internationally, Milan won back-to-back European Cup championships in 1989 and 1990, as well as the World Club Championship in 1990, though injuries limited Gullit's time on the pitch and forced him into a more peripheral role.

He left Milan in 1993 to play for Milan's Serie A rivals Sampdoria, where he rediscovered his pre-injury form. He led Sampdoria to the 1994 Italian Cup and a third-place finish in the league. Along the way, Gullit scored the game-winning goal in Sampdoria's 3-2 win over Milan. His performance that season was so impressive that Milan re-signed him in 1994, but he again struggled to find his form and returned to Sampdoria to finish the 1994-95 season. He finished his playing career at Chelsea, where he played from 1995-98. He went on to manage several clubs, including Chelsea, Newcastle United, Feyenoord Rotterdam, and the Los Angeles Galaxy.